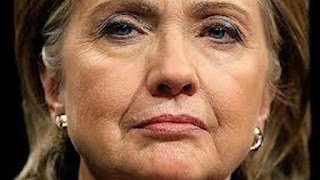 She who shall not be crossed! Sigh. I've come to the conclusion that Hillary will be the next President of the United States.  The problem is she shares too many of Trumps traits.  She just isn't as childish as he is.  At least publicly.

The most obvious similarities is their very large egos and narcissism.  The second is both have trouble with the truth. They can't seem to tell it.

They both scare the devil out of me.  As my dearly departed Mother used to say, "I won't be around for the fall out, thank heavens!" I won't be either and since I have no children or grand children I guess I too am glad.  I'm not particularly worried about future generations.  What is happening now is the new normal.  This will be their good old days. I can't imagine.

Back to what I will have to deal with.  Assuming it will be Hillary we will have a President who's lust for power far outweighs her love for country. What compass she will follow is any one's guess.  I would guess it will be the most expedient for which ever master she most needs to placate. Hopefully they will have a direction, unlike Obama's, that will bear some benefit for the country no matter how remote.  It's obvious she has no such thoughts of her own.

I've struggled over Trump as you who read this know.  He reminds me of a kid turned loose in a bouncy house.  He's all over the place and never the same place twice. The largest factor that disturbs be, though, is his refusal to rein himself in. We're already hearing the beginnings of excuses for a failed campaign.  The election is rigged.  Right.

We still have a ways to go.  He could quit before hand to stave off humiliation and the infamous e-mails in Julian Assange's possession may yet be released.  Oh happy day.

I wonder what would happen if both candidates were discredited to the point of having to withdraw before the actual election.  Neither back bench is particularly strong nor inspiring but maybe that's what we need.  Some staid old politician who still believes being pragmatic is the preferred way of getting things done.

Ah.  Those days are gone forever I fear.  I don't much care for the new normal.  It's a generational thing.  Too bad.

Email ThisBlogThis!Share to TwitterShare to FacebookShare to Pinterest
Labels: Hillary